Myanmar is the largest country by geographical area in mainland Southeast Asia and it is bordered by China on the north-east, Laos on the east, Thailand on the south-east, Bangladesh on the west, India on the north-west and the Bay of Bengal to the south-west with the Andaman Sea defining its southern periphery. One-third of Myanmar is total perimeter, 1,930 kilometers (1,199 mi), forms an uninterrupted coastline. Being a country bordering with five countries, Myanmar has a diverse culture and multi ethnics groups with different background, culture and traditions. They have their own traditions and costumes. There are 135 distinct ethnic groups officially in Myanmar.

There are eight major ethnic races which are;

Kachin people are mainly living in north-eastern Myanmar and border of China and India. Kachin people comprise of different ethnic sub-groups such as the Jinghpaw, Maru, Lahsi, Atsi, Lisu and Rawans and the estimated population is between 1 to 1.5 million. Majority of Kachin groups are Christian.  The landmark of Kachin is Hkakabo Razi , the highest mountain in the country which stands at the edge of the Himalyas and towers to a height of 5,889 meters (19,321 ft). Kachin is well known not only for its natural beauty but also for its natural resources like jade.

Kayah people are also known as Red Karen or Karenni who are settled in isolated mountain area between Kayin and Shan State along Myanmar border with Thailand. The estimated population is about300,000 people. They are the oldest indigenous group in the country, migrated from China in the 6th or 7th century. Red Karen or Karenni  has some similarities with 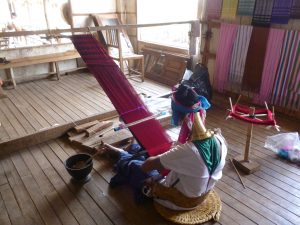 the costumes of the ethnic Kayin (Karen). Due to the Christian missionaries during the colonial era, many of Kayah are believing in Christianity and some are in Buddhism. Though Christianity and Buddhism are widely practiced, sprit worship still plays a part in Kayah today.

This ethnic group is one of the largest ethnic groups in the country and the estimated population is around 7 million. The religion is the combination of Buddhism, Animism and Christianity. Kayin is also divides into the several different sub-groups; each has its own language and distinctive name. The largest Sgaw and Pwo have differences of dialect within their languages. The Sgaw or Skaw is represented to the group of Burmese Kayin. Approximately one-third of the Karen population in Myanmar lives in the Karen State or administrative division. The Sgaw Karen, with a population of over 1 million, has settlements in the mountainous Karen State, in the Shan uplands, and to a lesser extent in the Irrawaddy and Sittaung deltas. The Pwo Karen (approximately 750,000) inhabits primarily the Irrawaddy Delta. The attractions are Mount Zwekabin, caves and pagodas to visit.

1.5 million of the total population is estimated as Chin and they also have many different sub-groups. They are one of Tibeto-Burman origin and live in the north-western Chin State of Myanmar. Their languages are different according to their represented ethnics groups and local. Having been colonized by the British and there were aslo Baptist missionaries, 80 to 90% of the population is Christian.  There are several hundred houses of Chin in the villages and were traditionally self-contained units, some ruled by councils of elders others by headmen. However, sizable minority of the Chin adhere to their traditional tribble beliefs as well as to Theravada Buddhism.  The most famous attractions of Chin State are Mount Victoria and the Reh Lake which will give you the breathtaking views.

Barmar is also known as Burman people are the majority ethnic group of Myanmar. The 68% of the population is the population of Burmar and this large amount is claimed. The Bamar population is itself divided into various sub-groups. So it is not a homogenous ethnic category. The traditional costumes and culture is influenced. Most of the Bamar are predominately Thravada Buddhists. The official language of the country is the native language of Burman.

Mon people are mostly living in Mon State situated in the Southern part of Myanmar and borders with Bago Region, Tanitharyi Region and Karen State. The Mon are one of the first people in the Southeast Asia and the earliest one to settle in Myanmar. The population is estimated around 8 million. They are always proud of their traditions and culture which is very rich and ancient. They introduced both written language and Buddhism to Burma. The majority of Mon are Theravada Buddhists and much of the culture is influenced by Buddhism. Mon culture and language used to be dominant in ancient Burma and Thailand historically. Their traditional longyi color originally red to signify bravery and purity. There are also some beautiful beaches as Mon has access to the Andaman Sea.

The Rakhine is also known as the Arakanese, the largest ethnics group in Rakhine State called Arakan in the west of Myanmar extending along the Bay of Bengal. It is estimated 4-5% of the total population of Myanmar. They are predominantly Theravada Buddhists. There are many subgroups of Arakanese, including the Mro, Thet, and Khmi. There are so many places to make an observation in Rakhine during your visit to Rakhine. Their traditional dance is also famous in the country.

Shan is also one of the largest ethnic nationality groups in Myanmar. Shan mostly live in Shan state where is in eastern part of Myanmar. But some Shan communities live is Kachin State to the north and in China, Thailand, and Laos which is border of Shan state.  From the recent census 4-6 million are estimated as Shan ethnics. There are also many smaller ethnic groups in Shan State including the Kokang, Lahu, Palaung, Pa O and Wa. Mostly all the Shan ethnics are believing in Theravada Buddhism. Shan language can be divided into three groups; eastern Shan dialect is closer to northern Thai dialect, the southern Shan dialect has borrowed some Burmese words and the northern Shan dialect has Chinese influences. As traditional food, Shan noodle is famous. You can see the amazing view by travelling around Shan State and feel the nature of Shan State.